A glimpse of Eleanor Taylor Bland. 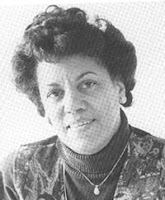 Libby Fischer Hellman revealed the sad news of the passing at age 65 of Eleanor Taylor Bland, creator of the Marti MacAlister series and a thoroughly delightful person. I remember her well in the early days of Malice Domestic, usually with a grandson in tow and up to some sort of mischief.

In the course of my editing numerous scholarly journals, there was an interview with Eleanor in Storytelling: A Critical Journal of Popular Narrative 5.3 (2006) by Norlisha F. Crawford (University of Wisconsin–Oshkosh). Here are two excerpts:


NFC: Let's talk a little about your work as it fits into the traditions of African American literature.  . . . Is there a conscious nod on your part of the cultural ancestry of the South and values passed on from the South to the North?

ETB:  I think it is just ingrained in what we are and what we do. I really do, as an African American woman, because I am also German, Scot[tish], and Irish. But as an African American woman, those are just my connections. I have never been to Europe; I have been to the South. Those are the people I know.  . . .  I just think it [Southern cultural ways] is just, for me, the norm. This is my environment; this is where I live. If I didn't write it like this, then I couldn't do it; I'd be writing about a white person. That is where we come from; that's our heritage; that is who we are, as black people. I couldn't not do that. (190–91; emphasis in original)

ETB: . . .  I thought about [Rosa Parks] a lot as she was honored with a place in the Rotunda. Can you imagine? She was on the verge of being evicted from the home she rented [in Detroit], at one point [in 1994]. . . . [N]ow, in death, people are honoring her and bringing flowers. Give me my flowers while I am alive.  . . . Honors are nice, but honor your heroes when they are alive and can smell the flowers. When you can see their faces smiling as they enjoy them. (195–96)

Posted by Elizabeth Foxwell at 5:04 AM