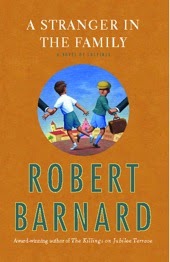 The multitalented author Robert Barnard, who died on September 19 at age 76, wrote this perceptive Spectator review in 2004 of a new translation of Chekhov's The Shooting Party (1884–85), noting that it is "awash with tricks of the detective-story trade" and that ". . . the characters appear trapped by the sheer weight of ordinariness surrounding them. They are like mice scurrying around in a cage, as step by step the murder becomes inevitable."

I hope the listing of Agatha Christie's The Murder of Roger Ackroyd as 1962 really means 1926; Barnard as the author of A Talent to Deceive: An Appreciation of Agatha Christie surely would have had this detail correct. Listen to my April 2006 interview with Barnard here, when his novel Dying Flames was released. We also had fun talking about his first novel, Death of an Old Goat.
Posted by Elizabeth Foxwell at 5:03 AM