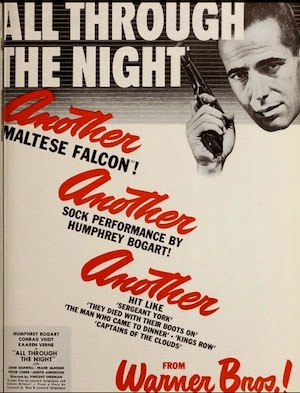 In All through the Night, gamblers take on Nazi saboteurs. The film stars Humphrey Bogart, Conrad Veidt, Judith Anderson, Peter Lorre, Jane Darwell, Jackie Gleason, and Phil Silvers. The film is not one of those selected for October's Humphrey Bogart Film Festival (to be held, appropriately enough, in Key Largo), although there are plenty of other goodies offered, such as In a Lonely Place.