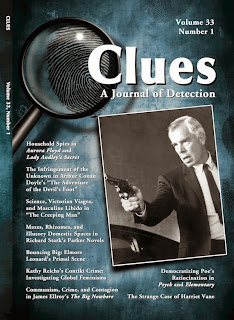 Clues 33.1 has been published; see below for abstracts. Contact McFarland for issue orders and subscriptions.

Update. The issue is now available on Nook and Kindle.

Introduction  JANICE M. ALLAN
Now You See Her—Now You Don’t:  Household Spies in Aurora Floyd and Lady Audley’s Secret RACHEL SMILLIE (U Aberdeen) In Mary Elizabeth Braddon’s novels the female domestic servant enjoys a uniquely privileged position; she is granted admittance to the most intimate spaces of the home and given unfettered access to the family’s secrets. By focusing on the role of the female servant as household spy, this essay explores the control these women are able to exercise over their respective narratives.

“Something in a New Key”: Democratizing Poe’s Ratiocination in Psych and Elementary PATRICK KENT RUSSELL (U-Conn) Psych (2006–14) and Elementary (2013–) take steps to democratize Edgar Allan Poe’s ratiocination. Early seasons of Psych take a greater step by providing viewing audiences access to clues and lessons in what to observe. Seasons 1 and 2 of Elementary also show lessons, but as character development, rather than to redistribute necessary knowledge.

Far from Home and Near to Harm: Mazes, Rhizomes, and Illusory Domestic Spaces in Richard Stark’s Parker Novels GREGORY ALAN PHIPPS  This article considers the construction of Richard Stark’s Parker novels in relation to the symbolic models of the maze and the rhizome. These function in the Parker novels as frameworks that capture the structural forms of various spaces, social encounters, and modes of subjectivity.

Scarlet Fever: Communism, Crime, and Contagion in James Ellroy’s The Big Nowhere JOSHUA MEYER  (U of Western Sydney) Throughout James Ellroy’s The Big Nowhere, the threat of communism and the institutional anxiety it engenders is played out through a series of symbolic associations among communism, crime, and contagion. Ellroy’s figuration of communism as a form of criminal contagion takes up underlying tensions involved with the discourse of typology that runs through the detective genre.

Kathy Reichs’s Contiki Crime: Investigating Global Feminisms
LILI PÂQUET (U Sydney) Kathy Reichs takes her novels around the globe, each stop highlighting how different institutions and justice systems let down their female citizens. The author examines the way in which the Temperance Brennan novels use tourism to reveal this institutionalized sexism and its relation to feminist theory.

In Search of No Thing: Latin American Detection, Irreal Investigations, and the Politics of Noncoincidence  DEVIN FROMM (UC-Santa Barbara) The author explores the way in which Latin American detection revitalizes the practical potential of the genre. Works by Jorge Luis Borges and Ricardo Piglia develop a middle ground between the classic analytic story and postmodern metaphysical detection, making the move from epistemological reflection to ontological doubt a critical opportunity.

The Professor Rises:  Science, Victorian Viagra, and Masculine Libido in “The Creeping Man” JOSHUA A. WADE  The author explores how Arthur Conan Doyle’s “The Adventure of the Creeping Man” sheds light on complications around Victorian conceptions of gender and gender performance by addressing the concept of the Victorian man of reason and interrogating the fetishizations of power, reason, and sexuality as embodied by Professor Presbury and Sherlock Holmes.


Bouncing Big: Elmore Leonard’s Primal Scene CHARLES J. RZEPKA (Boston U) In his first crime novel following 18 years of writing westerns, Elmore Leonard incorporates a coming-of-age scenario that pivots on what Freud calls “the primal scene,” reflecting the author’s notions of “childish” versus “childlike” personalities, professional growth and maturation, and his own anxieties at tackling a new popular genre.

This Is China and Shit Happens: Space in Rock, Paper, Tiger by Lisa Brackmann and  Other Crime Narratives Set in China and Russia M. ISABEL SANTAULARIA i CAPDEVILA (U of Lleida) The author analyzes how crime fiction in English set in China or Russia partakes of a (neo/sino)orientalist discourse intent on perpetuating China and Russia’s status as evil empires. Thus, even though these novels criticize the West, they still sustain the old West/East divide and allow for some self-complacency in the appreciation of the West.

Posted by Elizabeth Foxwell at 4:08 AM