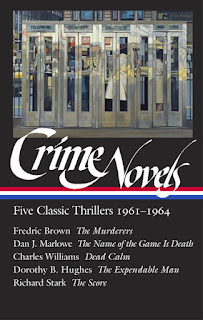 On January 3, the Library of America announced some of its fall 2023 releases, which included the following:

(1) Five Classic Thrillers 1961–1964 (The Murderers by Fredric Brown, The Name of the Game Is Death by Dan J. Marlowe, Dead Calm by Charles Williams, The Expendable Man by Dorothy B. Hughes, The Score by Richard Stark [Donald Westlake])

Below are some critics' reactions to the works in these volumes.

Re Highsmith's Tremor of Forgery: Terrence Rafferty in the 4 Jan. 1988 New Yorker dubbed the book "nihilistic."

Re Himes's Run Man Run: Sgt. Cuff in the 31 Dec. 1966 Saturday Review regarded this as a "[t]aut, devilish, ably-written slice of life—and death."

Re Marlowe's The Name of the Game Is Death: Anthony Boucher in the 11 Feb 1962 New York Times believed that Marlowe had reached "an impressive new high."

Re McBain's Doll: Mycroft Holmes in the 7 Nov. 1965 Boston Globe considered it "[p]robably the worst 87th Precinct mystery your reviewer has read." More temperately, Erin E. MacDonald in Ed McBain/Evan Hunter: A Literary Companion stated, "For such an obvious potboiler, the quality of the writing and the complexity of thought are an enjoyable surprise."

Re Millar's The Fiend (Edgar nominee, Best Novel): Sgt. Cuff in the 25 July 1964 Saturday Review called The Fiend a "taut tale of menace."

Re Stark's The Score: Reviewing the graphic novel version, Ian Chipman in the 15 Nov 2012 Booklist  stated, "You do not mess with Parker [the protagonist]."

Re Williams's Dead Calm (the basis for the 1989 Nicole Kidman-Sam Neill film): Boucher in the 27 Oct. 1963 New York Times called this "a superb story of terror and suspense in the loneliest reaches of the Pacific Ocean."