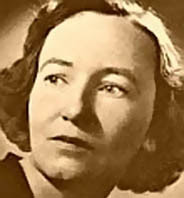 Hughes (seen at left) is known for some legendary noir novels: In a Lonely Place (novel reissued by Feminist Press; film directed by Nicholas Ray and starring Humphrey Bogart); Ride the Pink Horse (memorably filmed by Robert Montgomery, who also appeared in a 1948 radio production of In a Lonely Place); The Fallen Sparrow (featuring a terrific John Garfield); and The Blackbirder, among others. In a Lonely Place provides a look into the mind of a serial killer, long before the modern spate of such novels, and Hughes skillfully shows the reader how the character became what he is.

A longtime mystery reviewer for the Albuquerque Tribune, Los Angeles Times, and other newspapers, Hughes died in 1993.

Frances Noyes Hart, a distant connection of Edith Wharton, served as a YMCA canteen worker in France during World War I and wrote three mystery novels, including The Bellamy Trial (1927, "probably ... the greatest mystery story written this century," wrote Herbert Carter in the American Mercury). Released as a film in 1929, The Bellamy Trial was based on New Jersey's Hall-Mills murder case, which also influenced F. Scott Fitzgerald's The Great Gatsby. Her other novels include the Halloween mystery Hide in the Dark (1929) and The Crooked Lane (1934). She also published a collection of short stories (Contact and Other Stories, 1923). Her story "Contact" won second place in the O Henry Memorial Prize competition in 1920 (other second-place winners were Fitzgerald and Alice Duer Miller). She died in 1943.

Both writers appear on the Haycraft-Queen Cornerstone list: Hughes for her debut novel The So Blue Marble (1940), Hart for The Bellamy Trial. Both are out of print in the United States, although it appears you can still buy a French translation of The Bellamy Trial.
Posted by Elizabeth Foxwell at 12:12 AM