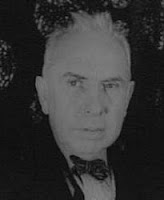 Sister Carrie author Theodore Dreiser, who earns a place on the Haycraft-Queen Cornerstone list via his novel An American Tragedy (1925), was born today in Indiana in 1871. He died in 1945.

An American Tragedy, made into the Elizabeth Taylor-Montgomery Clift film A Place in the Sun (1951) and a Met opera (2005), was based on the 1906 Grace Brown murder case in New York. Chester Gillette was convicted of the crime and died in the electric chair on March 30, 1908. An American Tragedy was banned in Boston in 1927, with one court charging that the book "manifestly tend[ed] to corrupt the morals of youth."
Posted by Elizabeth Foxwell at 9:08 AM

Labels: A Place in the Sun, An American Tragedy, Theodore Dreiser

In THE FAMILY, by Ed Sanders, Vera Dreiser is mentioned as a psycholgist at the California State Prison for women to whom Virginia Graham reports the confession to the Sharon Tate murders of her fellow inmate, Susan Adkins. I wonder if this is the same Vera Dreiser who wrote MY UNCLE THEODORE. It would be mildly interesting to some of us if a Dreiser had a role in chronicling this other American tragedy. It would make sense that she, too, had an interest in low-life studies.

Theodore Dreiser is my favorite author, too. He is simply the Big One.

According to _Contemporary Authors_, Vera Dreiser was the niece of Theodore Dreiser (daughter of Theodore's brother Ed); coauthor (with Brett Howard) of _My Uncle Theodore_ (1976); and staff psychologist of the California Institution for Women from 1962 to 1966. She is mentioned in Vincent Bugliosi's _Helter Skelter_.

Dreiser had one daughter, Sheri Dreiser Redi, and died in 1998.