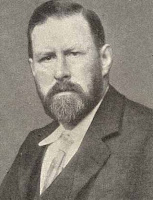 Bram Stoker, whose writing output was overshadowed by one novel, Dracula (1897), was born today in Dublin in 1847. By the time of his death in April 1912, he had produced eleven novels, four nonfiction works, a number of short stories, and various pieces for the London Telegraph (Valancourt Books is reprinting some of his rarer titles).

In the Department of Strange but True Historical Meetings, read about this 1887 encounter among Stoker, actor Henry Irving (Stoker served as his manager at one point in his career), and Buffalo Bill Cody.
Posted by Elizabeth Foxwell at 12:24 AM