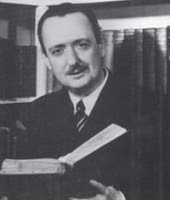 Carr's father was Wooda Nicholas Carr, who served in Congress from 1913 to 1915. When he was 23, his first novel, It Walks by Night (1930), was published by Harper and sold 15,000 copies. His sleuths include Henri Bencolin, Gideon Fell (modeled on G. K. Chesterton), and Sir Henry Merrivale. Carr, whose output exceeded 70 novels, also wrote frequently for radio, including the series Suspense. He was the first American member of the famed Detection Club, received an Edgar in 1950 for his biography of Arthur Conan Doyle, and was selected as a Grand Master in 1963. Ellery Queen called him "a master of deliberate, yet completely honest, misdirection" (Queen's Quorum 98).

Crippen & Landru is working on Thirteen to the Gallows and Other Plays by Carr and producer Val Gielgud (brother of John), which is a book of previously unpublished stage plays. For more on Carr's life and work, see Douglas G. Greene's John Dickson Carr: The Man Who Explained Miracles. Sadly, Carr's contributions to the Haycraft-Queen Cornerstone list (The Crooked Hinge, 1938; The Judas Window, 1938; Lord of the Sorcerers, 1946) are out of print.
Posted by Elizabeth Foxwell at 9:25 AM

Doug Greene's biography, which you rightly mention, is masterly, and required reading for the serious John Dickson Carr fan. I'm a huge fan of Carr's work, and I was delighted that the very successful BBC TV series 'Jonathan Creek' brought the Carr-style locked room mystery up to date - and proved that, properly handled, it is by no means past its sell-by date.