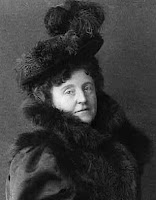 Playwright and author Frances Hodgson Burnett, best known for Little Lord Fauntleroy (1886), A Little Princess (1905), and The Secret Garden (1911), was born today in 1849 in Manchester, England. She emigrated to the United States, living in Tennessee; Washington, DC; and New York. She died in 1924.

For a Burnett book dealing with crime, consult the charming Editha's Burglar (1888, rpt. 1994), in which small Editha encounters a robber in her home and promptly reforms him.

In Burnett's The One I Knew Best of All (a memoir of her early years published in 1893), the young narrator contemplates sending a story to a publisher:

"I must have the right kind of paper," she argued, "because if I sent something that seemed queer to them they would think me silly to begin with. And I must write very plainly, so that it will be easy to read, and on only one side, because if they are bothered by anything it will make them feel cross and they will hate me, and hate my story too. Then, as to the letter I send with it, I must be very careful about that. Of course they have a great many such letters and they must be tired of reading them."

... Editors presented themselves to her as representing a distinct superhuman race. It seemed impossible that they were moved by the ordinary emotions and passions of mankind. (301, 303)

Plus ça change...
Posted by Elizabeth Foxwell at 1:25 AM