Clues vol 30, no. 1 has been published and includes the following: 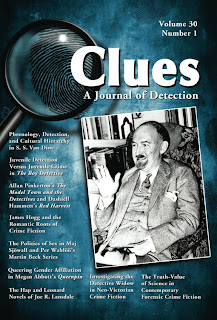 • Clues reveals for the first time that S. S. Van Dine (aka Willard Huntington Wright, the creator of detective Philo Vance) published several short stories featuring an intellectual criminal; these were produced under another name well before Wright adopted the Van Dine pseudonym. Using archival evidence, Brooks Hefner (James Madison University) links these stories to Van Dine and discusses them in the context of highbrow/lowbrow debates, including Wright's 1928 essay "I Used to Be a Highbrow but Look at Me Now" and his short-lived term as editor of the Smart Set.

• Lucy Andrew (Cardiff University) analyzes the relationship between children and crime via The Boy Detective; or, The Crimes of London. A Romance of Modern Times (1865–66).

• Dawn Keetley (Lehigh University) makes the case that certain novels with sexual crimes in the Martin Beck series by Maj Sjowall and Per Wahloo feature political commentary, disputing the majority of critical opinion.

• Reviews of a new edition of Mary Elizabeth Braddon's Henry Dunbar and Christopher Pittard's Purity and Contamination in Late Victorian Detective Fiction.
Posted by Elizabeth Foxwell at 5:02 AM

I'm definitely excited to read the article on SS Van Dine, though a small part of me had hoped that the ss would feature Vance.

No, Jeff, these stories were written well before the Van Dine pseudonym.