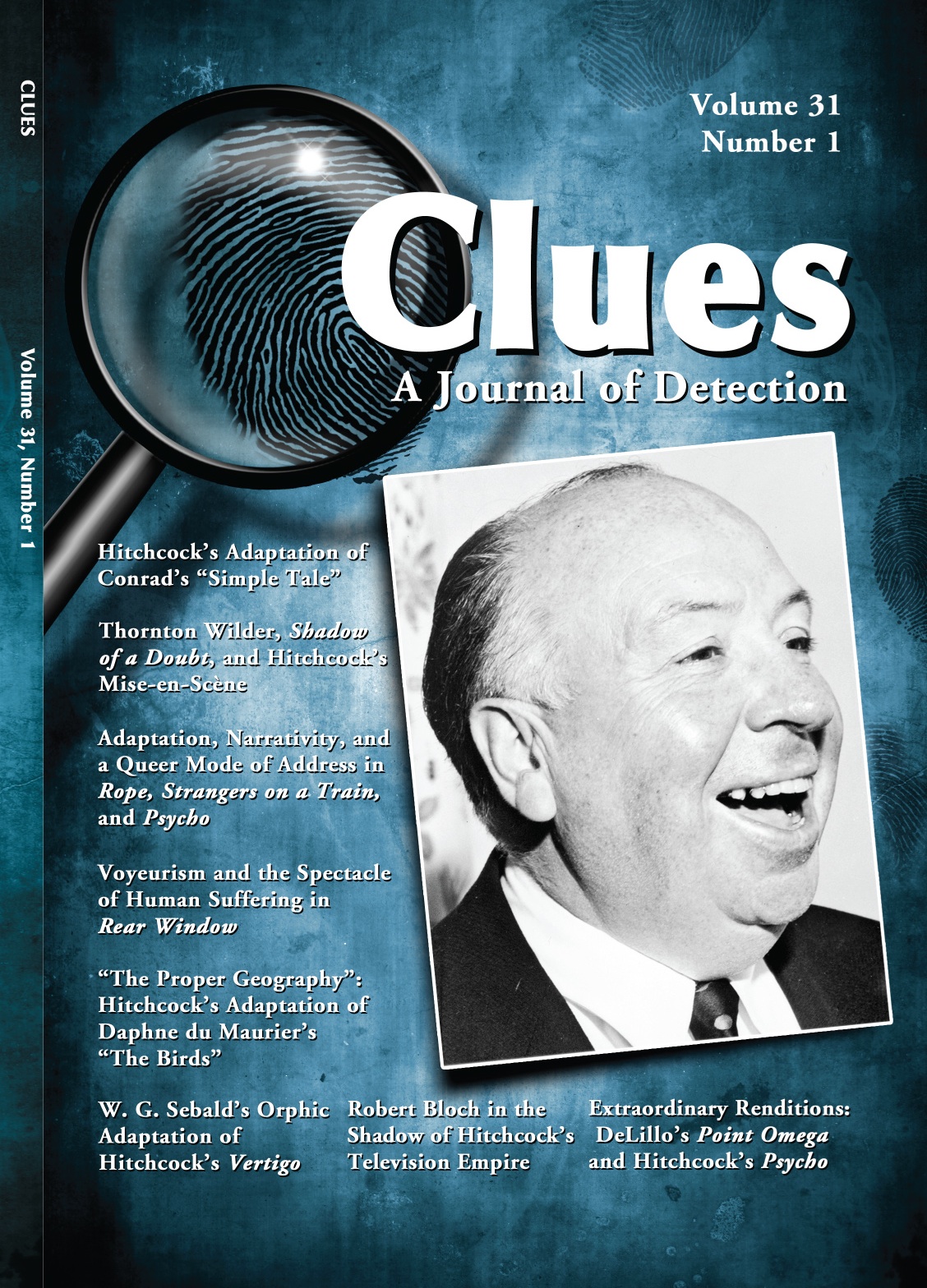 "Hitchcock and Adaptation" is the theme of Clues 31.1 (2013), guest edited by Loyola Univ Maryland's Mark Osteen (author of Nightmare Alley: Film Noir and the American Dream). The following is a summary of the contents (with links on the article titles). To order the issue or subscribe to Clues, visit this Web page or download the subscription flyer.

Melancholy Elephants: Hitchcock and Ingenious Adaptation. KEN MOGG Alfred Hitchcock ﬁlms such as Marnie and Young and Innocent represent a world that is equivocal. Highly ingenious and imaginative, they enable the spectator, much like the character Roger Thornhill in North by Northwest, to re-engage with that world and come “alive.”

"Inspiring Public Uneasiness": Hitchcock's Adaptation of Conrad's "Simple Tale." MATTHEW PAUL CARLSON (High Point Univ, NC) In Alfred Hitchcock’s Sabotage (1936; adapted from Joseph Conrad’s The Secret Agent, 1907), the director goes beyond mere use of the novel as a point of departure; he deeply engages its underlying anxieties about the artist’s relationship to his audience.
Reading Hitchcock/Reading Queer: Adaptation, Narrativity, and a Queer Mode of Address in Rope, Strangers on a Train, and Psycho. HEATH A. DIEHL (Bowling Green State Univ) Alfred Hitchcock’s Rope (1948) and Strangers on a Train (1951) reveal an interest in the odd; the peculiar; the “queer.” The author examines the narrative choices made in adaptation.

Hitchcock's Diegetic Imagination: Thornton Wilder, Shadow of a Doubt, and Hitchcock's Mise-en-Scene. DONNA KORNHABER (UT-Austin) The author considers the collaboration between Thornton Wilder and Alfred Hitchcock on Shadow of a Doubt (1943) and examines the inﬂuence of Wilder’s theories of theatrical abstraction and cinematic realism on Hitchcock’s developing sense of mise-en-scène.

Adapting Poe, Adapting Hitchcock: Robert Bloch in the Shadow of Hitchcock's Television Empire. DENNIS R. PERRY and CARL H. SEDERHOLM (both Brigham Young Univ) Alfred Hitchcock’s television programs challenged adaptors to transfer his style and persona to the small screen. Robert Bloch invoked his own and Hitchcock’s deep interest in Poe to create episodes that tended to be more dark, ironic, and psychologically edgy than others.

R. Barton Palmer and David Boyd, eds. Hitchcock at the Source: The Auteur as Adaptor. JOHN TEEL
Posted by Elizabeth Foxwell at 5:03 AM