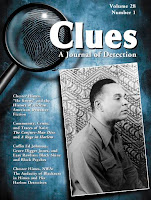 Go here for the table of contents with article abstracts; here for more information about the journal.
Posted by Elizabeth Foxwell at 5:05 AM