There are a few ways to mark tomorrow's centenary of the late author-illustrator Syd Hoff (Danny and the Dinosaur, etc.): 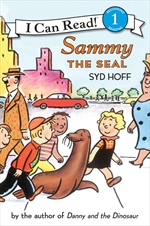 • The exhibition "Syd Hoff: Finding Home" is on display at the Miami Beach Regional Library until October 1. Its curator, Dina Weinstein, wrote the article  "Are Syd Hoff's Books Jewish?".

• Cartoonist Mike Lynch highlights on his blog a rather wonderful book, Collier Collects Its Wits (1941), which features self-portraits by cartoonists such as Hoff ("a citizen of the Bronx [since] 1912") and Charles Addams.
Posted by Elizabeth Foxwell at 5:02 AM