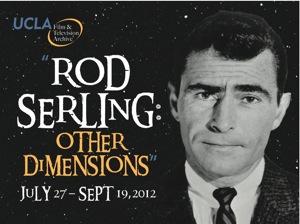 The UCLA Film and Television Archive continues its look at the career of Rod Serling—with special attention to his work outside of Twilight Zone and Night Gallery—through September 19. Coming up are his celebrated Requiem for a Heavyweight (and "The Man in the Funny Suit," which focuses on the making of Requiem) as well as Planet of the Apes; lesser known is The Yellow Canary (1963), in which Pat Boone plays a musician whose son is kidnapped. In addition, the archive showed Let Us Continue, a U.S. Information Agency short film written by Serling in the wake of the JFK assassination that profiled President Lyndon Johnson and his public policy interests. Also on view was the 1969 pilot for "The New People" (which bears a resemblance to Lost) written by Serling and starring Richard Kiley.


Update. Television Obscurities discusses an alternative version of The New People pilot.
Posted by Elizabeth Foxwell at 6:20 AM