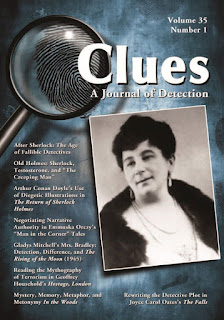 Clues vol. 35, no. 1 (2017) has been published. Contact McFarland to obtain a print copy of the issue or to subscribe to the journal.

The following are the abstracts for the issue:

Introduction: Reevaluating the Past and the Present
JANICE M. ALLAN


After Sherlock: The Age of Fallible Detectives
MAURIZIO ASCARI (University of Bologna)
In the wake of Sherlock Holmes’s success, writers and critics explored the relationship of the fallible detective to the ideological and aesthetic characteristics of the Golden Age. The author examines this phenomenon, shedding light on the transition between the infallible detectives of positivism and the vulnerable detectives of post–World War II psycho-thrillers.

Arthur Conan Doyle’s “The Creeping Man” captures the early–twentieth century’s interest in male menopause and hormone replacement. The now-retired Sherlock Holmes and the aged Professor Presbury embody the conflict between aging as diminishment and aging as healthy and vigorous, a conflict still affecting readers who hesitate to accept Holmes as elderly.

"Look at This Map": Arthur Conan Doyle's Use of Diegetic Illustrations in The Return of Sherlock Holmes
THOMAS VRANKEN (University of Melbourne)
Four stories from The Return of Sherlock Holmes in the Strand Magazine and Collier's Weekly featured hand-drawn maps and other visual material supposedly created by Arthur Conan Doyle’s characters. These peculiar diegetic phenomena serve an ambivalent, even contradictory, function, both drawing in and repulsing the reader.

Arthur Conan Doyle's Lens KATHERINE VOYLES
The author argues that relations of scale are central to the late-nineteenth-century detective fiction of Arthur Conan Doyle, in which the movement between large and small, far and near, and the distant and the intimate is condensed by making Sherlock Holmes’s own vision the locus of that movement.

Gladys Mitchell’s Mrs. Bradley: Detection, Difference, and The Rising of the Moon (1945) LEE O’BRIEN (Macquarie University)
A sharp sense of parody leavens the realist modes of Gladys Mitchell (1901–83), producing novels that both abide by and subvert the rules of Golden Age detection. The Rising of the Moon (1945) is her finest novel, one that uses its formal “play” to register moving questions of human desire and agency.

Nancy Drew and the Ivory Tower: Early Academic Study of the Girl Detective JULIE STILL (Rutgers University, Camden campus)
Although the Nancy Drew mystery series has had a consistent readership, very little early scholarly research was done on the books or the character. The journal literature from 1930 to 1993 reveals four areas of study: Nancy’s independence, her sexual identity, racial and ethnic stereotypes in the books, and business and legal issues regarding the books and film adaptations.

Reading the Mythography of Terrorism in Geoffrey Household’s Hostage, London: The Diary of Julian Despard
ROBERT LANCE SNYDER
Framed as a fictive diary, Geoffrey Household’s Hostage, London (1977) addresses the threat of nuclear terrorism in the West. Through his narrative, protagonist Julian Despard struggles to understand his divided allegiances, documenting the moral vacuity of ideologically driven terrorism.

Mystery, Memory, Metaphor, and Metonymy In the Woods RACHEL SCHAFFER (Montana State University Billings)
Five mysteries by Tana French take place in the woods near Knocknaree, Ireland. Through metonymic associations of the woods, as well as narrative techniques from hard-boiled and gothic traditions, French examines issues related to the mutability of memory, the lingering effects of the past on present lives, and the economic shifts affecting Irish identity and society.

Thrill or Angst? Metaphysical Implications of Rewriting the Detective Plot in Joyce Carol Oates’s The Falls  TANYA TROMBLE
A growing number of Joyce Carol Oates’s novels are a peculiar sort of “whydunit.” In Oates’s The Falls (2004), her detectives occupy a middle ground between the Golden Age detective and the hard- boiled hero—one example of the metaphysical detective story in her fiction that resists even this wide-ranging designation.

The Lonely Road to Freedom: Jack Reacher’s Interpretation of an American Myth JEROEN VERMEULEN
Jack Reacher, created by British-born Lee Child, rejects the myth of the American dream in all its guises and straddles two emblematic American genres—cowboy and hard-boiled detective fiction—in his quest for absolute, utopian freedom. Paradoxically, this turns him into a quintessentially American character.