Charles Scribner, who started the publishing house in January 1846 that bears his name, was born today in New York in 1821. Scribner's first bestseller was J. T. Headley's Napoleon and His Marshals, published in April 1846.

And Texas Congresswoman Barbara Jordan was born today in Houston in 1936. Many remember her keynote address to the 1976 Democratic 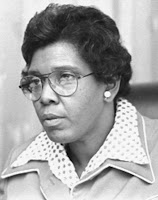 convention as well as her spirited service on the House Judiciary Committee during Watergate. After she left Congress in 1979, she taught at the LBJ School of Public Affairs at UT Austin until her death in 1996. For a collection of her speeches, see Barbara Jordan: Speaking the Truth with Eloquent Thunder (UT Press, 2007). What an extraordinary mind.

I am not going to sit here and be an idle spectator to the diminution, the subversion, the destruction of the Constitution. — Barbara Jordan, July 25, 1974

Posted by Elizabeth Foxwell at 12:05 AM