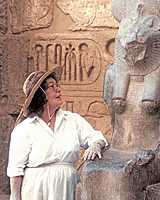 MWA Grand Master Barbara Mertz, aka Barbara Michaels and Elizabeth Peters, turns 80 today. She published her first novel, The Master of Blacktower, in 1966, and it should be noted that long before the recent flurry of vampire novels, the Michaels novel The Dark on the Other Side (1970) dealt with an emotional vampire and can be read as a horror work (one friend told me that she had to turn on all the lights in her house after she read it—the greatest compliment to an author).

It also should be noted that Mertz, initially working in a publishing climate oriented to formulaic romantic suspense, struggled with her skeptical publishers to write the humorous mysteries with intelligent heroines that she was certain readers would enjoy. Many mystery authors who came after her owe a considerable debt to her persistence. Her redoubtable archaeologist Amelia Peabody Emerson first appeared in the H. Rider Haggard-inspired Crocodile on the Sandbank (1975); other series heroines include Mertz alter ego Jacqueline Kirby (debuted in The Seventh Sinner, 1972) and statuesque art historian Vicky Bliss (debuted in Borrower of the Night, 1973. Mertz is currently working on another Bliss book that will follow Night Train to Memphis. Night Train, a Peters book, features one of the funniest blurbs in blurbing history, written by one Barbara Michaels.)

Mertz's nonfiction Egyptology books Red Land, Black Land and Temples, Tombs, and Hieroglyphs are mainstays of undergraduate Egyptology courses—indeed, a revised edition of Temples will be issued by Morrow in December. She endowed a scholarship for mystery writing at Hood College in Maryland.

Go here to see a Webcast of a 2003 Mertz talk at the Library of Congress.

The last word belongs to Robert Barnard at the first Malice Domestic in 1989: "What can you say about Elizabeth Peters that she hasn't already said?"

Photo credit: Dennis Forbes
Posted by Elizabeth Foxwell at 9:40 AM