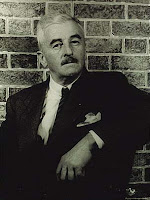 Today's birthday of William Faulkner (b. 1897, d. 1962) serves as a reminder that Faulkner was an avid mystery reader (according to A Companion to William Faulkner by Richard C. Moreland [373], Faulkner's library included works by John Dickson Carr, Dashiell Hammett, Dorothy L. Sayers, and Rex Stout). He also wrote some of his own, including Intruder in the Dust (1948) and six stories with lawyer Gavin Stevens that appear in Knight's Gambit (1949). The Providence Sunday Journal savaged Knight's Gambit with "[t]he result is Faulkner disemboweled and thunder without God" (reproduced in William Faulkner: The Contemporary Reviews 289).

Wow. And I thought I'd read some bad reviews.

Go here to see some vintage covers of Knight's Gambit and magazines with Faulkner's mystery work.
Posted by Elizabeth Foxwell at 11:00 AM

Interesting-- Faulkner also helped adapt Chandler's The Big Sleep for the screen (the Bogey version). I always thought Absalom, Absalom was a brilliant mystery novel-- the mystery being not who the killer was, but why.