British author, broadcaster, and prolific man of letters J. B. Priestley, who wrote the play An Inspector Calls (1945), was born today in Yorkshire in 1894. He died in 1984. 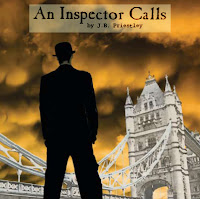 An Inspector Calls involves the prosperous Birling family in pre-World War I England and what happens when an Inspector Goole arrives on their doorstep with news of a suicide.

Priestley also wrote Mystery of Greenfingers: A Comedy of Detection (1937) and Bright Shadow: A Play of Detection in Three Acts (1950). Other mystery-related works include Benighted (aka The Old Dark House, 1927); the spy spoof I'll Tell You Everything (1932; cowritten with Gerald Bullett); Blackout in Gretley (1942), a novel of Nazi espionage in England; and Salt Is Leaving (1966).

Photo: Evocative artwork by Holly Harrell for the 2006 production of An Inspector Calls, Regent University (VA)
Posted by Elizabeth Foxwell at 12:20 AM