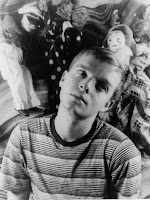 Truman Capote, who said the above in Music for Chameleons (1980), would have turned 83 today. He died in 1984. In Cold Blood, his pioneering nonfiction novel of 1965, has gone through more than 50 editions and generated four screen adaptations—two on the book itself (1967, 1996), two on its process (2005, 2006). It is often forgotten that Capote's close friend Harper Lee accompanied him to Kansas and assisted in the research of In Cold Blood; the book is dedicated to her.

Capote also scripted the Humphrey Bogart-John Huston film Beat the Devil (1953) and admitted to making a mistake in resolving the notorious ambiguity in his screen adaptation of Henry James's "The Turn of the Screw," The Innocents (1961).

My favorite of Capote's works is The Muses Are Heard, an acutely observed account of a Porgy and Bess troupe touring Russia in 1955. I was also struck by "Willa, Truman, Truman, Willa," a wonderful, woefully brief piece that appeared in the November 2006 issue of Vanity Fair, in which Capote describes a meeting with Willa Cather, one of his favorite authors.
Posted by Elizabeth Foxwell at 12:25 PM

Labels: In Cold Blood, The Muses Are Heard, Truman Capote