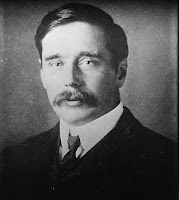 One of my favorite films is Time After Time (1979), written and directed by Nicholas Meyer, that pits Wells (played by Malcolm McDowell) against Jack the Ripper (played by a very scary David Warner). And here is an interesting 1940 radio encounter between Wells and Welles—Orson, that is—the creator of so much panic with the Mercury Theatre broadcast of War of the Worlds in 1938.

"Crime and bad lives are the measure of a State’s failure, all crime in the end is the crime of the community."—H. G. Wells, A Modern Utopia (1905)
Posted by Elizabeth Foxwell at 1:00 AM

Labels: H. G. Wells, The Invisible Man, The Island of Dr. Moreau, The Time Machine, War of the Worlds